The Book of Bob

In the beginning, Bob didn’t plan to start a religion; it just happened.  That’s how Bob viewed most of his life up to that point.  It just happened.

It just happened that he was born fifty years ago in the Northwest Region of the Free Nation.  When he was twenty, it happened that a strong, stout woman named Helen would pick him out and decide to marry him.  It happened they would inherit a house from her parents where they would live for thirty years until it happened she would leave him on his fiftieth birthday.

When Helen married Bob, her father put him to work framing houses.  Thirty years later, he was still at it and his back was sore.  It happened that Bob would never be able to give Helen a child.  Maybe it was for the best.  Parenting’s tough.  Like most people, they probably wouldn’t have done a very good job.

The day after Helen left him, Bob discovered he was ragged, middle-aged, childless, wifeless, going-on-old.  He found himself living in a ragged old house on a ragged old street, talking to his ragged old dog named Bud. That was before Bud started talking back to him.  Pretty soon God would talk to Bob, too.  God would call him “Son.”

Read Chapter One
Table of Contents

Political satire at its metaphoric best. Read it and laugh with an undercurrent of un-ease for the truth within the story line and how it resembles our current state of political affairs.

I knew Paul Chasman could write music (just check out his CD’s Songs From the Bay, I Hope, Real Songs, Piano Sonata No. 7: Guitar Transcription, and Sonatas No. 1 and 2 for Guitar, also available from Amazon), but who knew he could write words as well? Now Paul Chasman has written a parable for our times. The Book of Bob is an Orwellian morality play of apocalyptic proportions (I’m not sure what all this means, but I know what I like, and I like this book.) The Book of Bob is an entertaining romp of a read, ala Christopher Moore. But beyond the humor are words of wisdom that the best of us would do well to heed. In fact, the book is chock full of words to live by. If God were to update His own words, I’d expect Him to turn phrases like Dad does in this book: “If thou liest with mankind, and if womankind liest with womankind, then maybe we can get a handle on this population problem: You guys are always throwing my words around: `Go forth and multiply!’ I said that ages ago. It’s so retro. Did you think I wanted you to go forth and multiply forever? Do the math!” (To those of you who find putting words in God’s mouth offense – “Get thee over it!” I found myself intoning, “Oh, Lord, save us all from your followers.”) Though full of recognizable caricatures of present-day figures (so if you don’t hurry up and buy this book before present becomes too far past, you might have to work harder to get the joke), The Book of Bob is a timeless fable, destined to become a classic.

I’m first to tell the world about this wonderful book. I’ve not finished it yet, but it’s one of those books that you can’t wait to find out what happens, and when it does, you are sad that it’s over. I can tell. I was talking to bob about it. He asked me if I wanted to be a carrier pigeon, but I had too many things to do right now, I told him I’d get back to him.
Anyway, about the book. It’s great. I laugh out loud, wake the dog, cats, husband, and go back for more.
helluva deal!

I read it just before the run up to this year’s election. The irony, the absurdity, and the over-arching egotism of the characters was a strong parallel to the politics of today. Think Kurt Vonnegut Edward Albee join forces to destroy fact, gas lighting is the only communication between humans, and money and sex still rule the masses.

This is one of the most hilarious books I have ever read! It won my personal prize for the greatest number of times I laughed out loud. A spoof of religion, it nevertheless manages to convey some basic religious values in the most entertaining way possible. The dialogue and especially the use of dialect and the vernacular reminded me of Mark Twain. If you want to read something “wet your pants” funny, I highly recommend this book.

The Book of Bob is one of those rare books that made me laugh out loud in public. Just describing the premise – that God (aka “Dad”) has chosen to write a new blockbuster through a new prophet (Bob) – is enough to provoke giggles. It also suggests that there may be irreverent satire ahead. Knowing Paul Chasman and his work as “Carl Estrada,” I was prepared. However, if you’re looking for angry political rants against conservatives, go find a blog. All forms of 21st-century wackiness are fair game for Dad’s mockery. This book is so funny, I forgot it had an agenda!

Butter my biscuits, it’s a beauty of a book.
”The Book of Bob” should be subtitled “Candide Meets the Political and Religious Equivalents of the Marx Brothers’ Evil Twins.” It features a naif who just wants to do the right thing. And…
–a picaresque confederacy of saints and crazies on one helluva road trip
–an elected leader who is hiiarously linguistically challenged. The Right Reverend Spooner has met his match. (And so has anybody with even an advanced case of Satyriasis)
–the loopiest, unlikeliest, loveliest love story since, say, Burns & Allen, or Auntie Mame and Beau, or what the hell, Gargantua et Pantagruel
–a chilling story of a decent man gone crazed assassin
–a happy ending! (And just as an aside, the story involves the coolest dog since Rin Tin Tin. Asta. Lassie. Scooby Doo.)
Never has Christmas shopping been so easy. My Wife and I bought 20 copies. We don’t have that many friends, but we may meet someone-and whoever it might be, they’ll need this book. So do you. 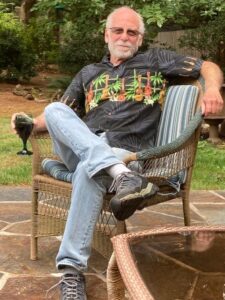